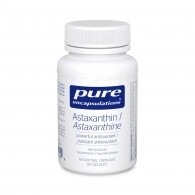 A very stable, powerful, fat-soluble antioxidant from the carotenoid family. Research has found that this astaxanthin helps to protect against ultraviolet-induced free radical damage. Astaxanthin is different from beta-carotene in that it has two additional oxygenated groups on each of its ring structures, enhancing its ability to scavenge free radicals.

Astaxanthin has demonstrated to be several hundred times more effective than vitamin E in neutralizing singlet oxygen molecules and has been shown to exert greater antioxidant activity than both zeaxanthin and lutein.

Astaxanthin protects the phospholipid membranes of cells from oxidative damage. In a human clinical evaluation, supplementation with astaxanthin for two weeks provided significant antioxidant protection for the skin.

Save this product for later